Home » Everything You Need To Know About Rear Shocks

HOW DO I MEASURE A REAR MOUNTAIN BIKE SHOCK?

It is important to understand that your rear shock size on your full suspension mountain bike is not measured by the amount of rear wheel travel, but by the eye-to-eye length, and the stroke length.

Eye-to-eye length is the distance between the two mounting points on the shock, or the rear shock mounts on the frame. 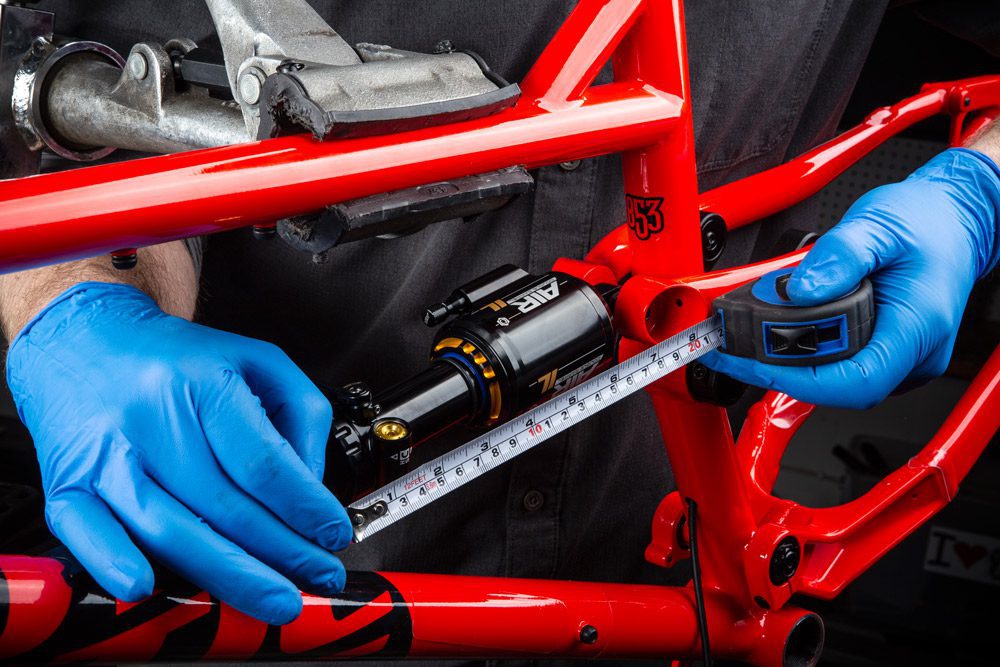 WHAT IS REAR SHOCK MOUNTING HARDWARE?

A mounting bolt (that comes with your bicycle’s frame) will pass through the hardware axle and thread into the frame or the frame’s linkage, which secures the hardware and shock in place.

In most cases, there is a bushing that is pressed into the shock’s eyelet, which the hardware axle is then pressed into. The bushing we use and currently press into our shocks are called Igus bushings, they are on off-white cream color.

A bushing is needed to allow for some rotational movement of the hardware axle when the rear linkage pivots – If there were no rotation allowed at all between the shock eyelet and the hardware axle, the rear linkage would not move freely and the rear shock would absorb all of the extra leverage, which is not ideal.  Bushings are meant to wear, rather than the alloy material that your shocks mounting eyelet is made of. They are easily replaceable, and we replace them during every in house factory direct service.

HOW DO I MEASURE REAR SHOCK HARDWARE?

The two images above would represent 24mm X 8mm hardware.

A 15mm open end eye simply means there is no bushing that is installed into that shock’s mounting eyelet. Industry standard shock mounting eyelet diameter is 15mm 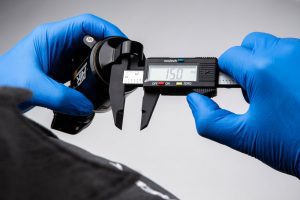 WHAT IS A TRUNNION MOUNT?

“Sag” refers to the amount of suspension travel that is compressed when the bike is on flat ground under rider weight and riding gear.  Setting the correct amount of sag on your suspension plays a crucial role in the overall performance of your full suspension mountain bike. Setting sag should always be the first step in setting up your suspension.

You might be thinking, why is setting sag so important? Sag affects the geometry of the bicycle, and frame designers design frames with geometry and sag in mind – ideally you would want to experience the bike in the way it was intended and designed to be ridden. When you have too much sag, you do not have a high enough spring rate to support your rider weight.  This can result in pedal strikes and the suspension going through it’s travel too easily, and “bottoming out” often, and with rear shocks, this can result in pedal strikes and less pedaling efficiency.

When you do not have enough sag, or the spring rate is set too high, you risk not utilizing all of your suspension travel, and again affecting the intended geometry and overall performance of the bicycle.

We recommend first checking with your bicycle manufacturer on the suggested amount of sag they intended for your bike.  If that information is not available to you, we recommend 25-35% sag depending on your shock size and intended use.

HOW DO I MEASURE SAG?

With air shocks, the first step is to charge the air spring (pump air into the air valve) to around 100 psi.  Take your shock pump off and find a place to cycle the shock through it’s travel 15-20 times. This is to ensure that the positive and negative air chambers are equalized.  Put your shock pump back on, then pump the shock up to around your rider weight. Take the pump off and cycle the air through the shock again. Find a flat surface and have your normal riding gear on and get into a ready position, and try not to move.   If you ride on trails that require you to be out of the saddle and in an attack position frequently, set sag when you are in your attack position.  If you are riding on paved trails where you are mostly seated while pedaling, set sag when you are in the seated position.

Slide the travel indicator o-ring all the way down to the wiper seal:

Being careful not to bounce the suspension, dismount the bike.  Measure the distance between the wiper seal and the o-ring 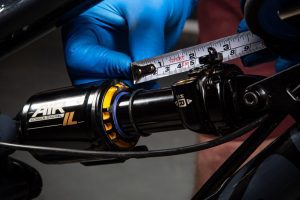 HOW DO I MEASURE SAG ON A COIL SHOCK?

With coil sprung rear shocks, adjusting sag and finding the measurement is a little different than air shocks. There is no air valve that you can increase or decrease air pressure into, instead there is a preload collar that you thread up and down the damper body to compress or release tension on the external spring, which affects the amount of sag. It’s important to note: the preload adjustment on coil sprung shocks only affects sag.

The first step is to confirm the eye-to-eye length and stroke length of the shock.  Then find a flat surface, and hop on the bike with all of your normal riding gear on.  Get into your ready position, and measure the distance between the eye-to-eye length – you will need someone to assist you with this step.

This article might not cover every single rear shock question you might have, but it should hopefully provide you with some answers. All Cane Creek shocks are backed by our commitment to customer service. If you have any further questions about one of our shocks, feel free to contact us.