CS is a selectable climbing mode on Double Barrel shocks that allows the rider to retain the advantages of a fully-suspended bike while climbing, without unwanted suspension motion.  CS is not your conventional pedal-platform as it adjusts both LSC and LSR.  By selectively tuning both compression and extension phases when climbing, the shock maintains better traction and control while enhancing pedaling efficiency through the shock’s entire travel.

WHY IS IT BETTER?

The strength of CS lies in the fact that it provides climbing-specific chassis damping in both compression and rebound.  The result is better rear-end traction and connection with the trail while minimizing annoying pedal-induced bob.  Simply put – the rider is less fatigued and more comfortable.  Traditional climbing “platforms” only deal with one half of the climbing dynamics, and thus require the rider’s body to respond to the minimally damped rebound forces that are common during technical climbing.

HOW DOES IT WORK?

The Climb Switch changes the low speed damping of Double Barrel shocks in one simple switch, to optimize suspension dynamics during climbing.  It does this by turning on and off a set of internal ‘climbing circuits’ that are accessed when CS is engaged.  Cane Creek tunes the ‘climbing circuits’ specifically for the demands of off-road climbing to achieve improved pedaling efficiency with less chassis motion. When the rider is ready to descend, with the flip of CS, the shock returns to the traditional low-speed circuits of the Double Barrel.

To best illustrate the advantage of CS, we created the animation below using real data from dyno plots of a shock with CS off and then with CS on.

HOW IS IT DIFFERENT?

The CS feature on DB shocks completely alters the low-speed damping character of the shock.  That is, CS changes compression and rebound damping simultaneously to mitigate unwanted chassis motion while climbing without compromising the traction and control one expects from a modern suspension bike. Other shocks with climbing specific adjustments only alter the compression behavior of the shock with no impact on rebound.  The Dyno Chart below illustrates the the action of the DBair with CS ON and CS OFF as compared to the competition.  A damper generates force in opposition to velocity.  As velocity increases, so too does the force generated by the damper. 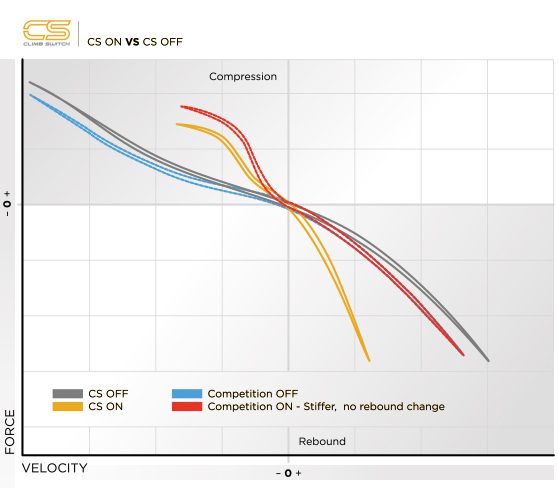 The horizontal axis of this graph shows shaft speed (velocity).  Negative velocity indicates the shaft is moving into the shock (compression) while positive velocity is extending the shock (rebound).  The vertical axis represents force.   Positive force is the force generated to resist compression and conversely negative force is the force generated to resist shaft extension (rebound force).  In a nutshell, the upper left quadrant is compression, the bottom right is rebound.  As velocity increases (moves away from the middle) the force increases.

The grey line is a graph of a shock with CS Off and is indicative of a typical Double Barrel damper at a mid-range setting.  The orange line is the CS ON setting and is much steeper than the grey line.  This indicates that for the same shaft speed, the CS ON setting develops more force.  In other words, the CS ON setting is stiffer and resists movement more than the CS OFF setting and both compression and rebound are affected.  For the rider, this translates into better traction and control at low speeds.

The red line is a competitor’s shock with the climb feature on and the blue line is the competitor’s climb feature off.  Most notably, the rebound curve overlaps because there is no change in rebound damping.  The compression curve is steeper because our competitors require more compression damping to make a bike feel efficient by limiting the suspension movement. The rider’s body is then required to respond to the minimally damped rebound forces and can experience less traction, less control and more fatigue. 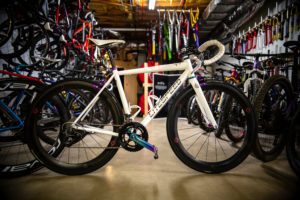 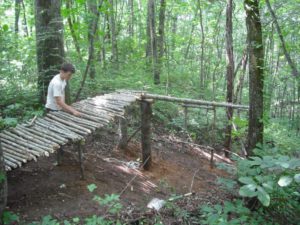 Being Frank: Our 7 Tenets